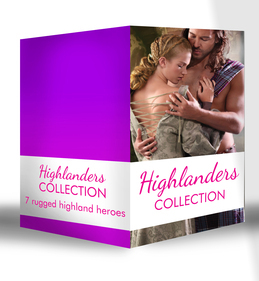 CLAIMED BY THE HIGHLAND WARRIOR by Michelle Willingham

Bram MacKinloch has spent seven long, torturous years in captivity, with only three things to keep him alive: pure brute strength, a thirst for revenge and the memory of his pretty wife’s face. Shock is only one of the emotions coursing through Nairna’s body when she sees Bram again. A lot has changed since they so innocently wed…

Ciara Robertson has loved formidable Highlander Tavis MacLerie all her life. She watched, brokenhearted, while he married and lost another. Now, finally of marriageable age, Ciara throws her heart at his feet… But her dreams are shattered, Ciara accepts another man’s hand. Ordered to take Ciara to her husband-to-be, Tavis is tormented—and tempted—every step of the way….

RETURN OF THE BORDER WARRIOR by Blythe Gifford

Word in the royal court has spread that the wild scottish borders are too unruly. Upon the king's command, John Brunson must return home…

Once part of a powerful border clan, John must persuade his family to honour the king’s call for peace.

To succeed, John knows winning over the daughter of an allied family, Cate Gilnock, holds the key.

Quintus MacLachlann is arrogant—unapologetically so. When he’s asked to impersonate one half of a married couple to infiltrate Edinburgh society he relishes the challenge of being 'married' to the frustratingly wilful yet beautiful Esme.

Esme makes no bones about her fervent dislike of the dishonoured rake. But being forced to play wife to the handsome-as-sin wastrel brings up very real feelings of desire…

HER HIGHLAND PROTECTOR by Ann Lethbridge

Only, there is a complete lack of eligible suitors in the Highlands! But then Niall Gilvry is assigned to watch over Jenna, and there's no denying she finds this handsome Scot most distracting!

Niall knows Jenna is too fine a lady for the likes of him—after all, high society has little time for a lowly third son—but he takes his duty seriously. With danger lurking in the shadows, Niall stays close. It would be so easy to pull her into his arms….

A ROSE IN THE STORM by Brenda Joyce

Legendary warrior Alexander “the Wolf” MacDonald rides with Robert Bruce to seize the throne of Scotland. But when he takes the fiery Lady Margaret prisoner, she quickly becomes far more than a valuable hostage. For the passion between them threatens to betray their families, their country…and their hearts.

Since her adoption by the Ogilvie Clan, Roses has been marked as an outsider. Her fair hair and golden complexion set her apart, as does a mysterious tattoo. So when Laird Ogilvie corners her with an indecent proposal, Roses flees; but her escape is interrupted by Wilkie Mackenzie, the wild and handsome brother of nearby Clan Mackenzie’s leader. Wilkie is honour bound to marry into the family of a valuable ally. But when Roses sweeps him off his feet settling for an arranged match is no longer an option. Now, these star-crossed lovers find themselves in a fight to defend both their hearts…and their lives.