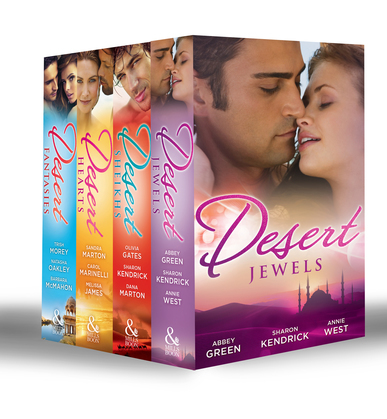 
THE SHEIKH’S UNDOING by Sharon Kendrick

Independent to his core, Tariq relies on no one but himself—with a little bit of help from his indispensable, sensibly dressed PA Isobel Mulholland.

When a car accident leaves this dynamic sheikh injured and reliant on Isobel, his first reaction is to be furious!

THE SULTAN’S CHOICE by Abby Green

Chosen as the Sultan's bride, Samia has no option but to go ahead with the marriage. And, as her new husband slowly peels away her bejewelled wedding finery, despite her best intentions she finds her inhibitions swept away.

GIRL IN THE BEDOUIN TENT by Annie West

Sheikh Prince Amir has vowed to redeem his scandalous family name—so the last thing he needs on a tour of his desert kingdom is to have a sensuous blonde with more spirit than clothes presented for his harem.

MONARCH OF THE SANDS by Sharon Kendrick

Francesca is shocked when family friend Zahid Al Hakam turns up on her doorstep. After all, he’s now the Sheikh of Khayarzah! Francesca’s certainly tempted by Zahid’s invitation to come to the desert and work for him.

TO TAME A SHEIKH by Olivia Gates

He’d noticed her across a crowded room, and in that instant Sheikh Shaheen Aal Shalaan wanted her. With just a few words, Shaheen had his mystery woman in his bed, where she awakened passions he’d long denied.

Proud, imperious and leery of pretenders to the throne, Sheikh Karim Abdullah saw Julia Gardner as just another gold digger. The American claimed to be carrying his dead twin's child, so the Dark Sheikh decreed she remain his palace "guest" until paternity was established.

SHEIKH WITHOUT A HEART by Sandra Marton

Dressed only in a skimpy sequin-studded bikini is not the way Rachel Donnelly wants to meet Sheikh Karim al Safir. Especially when he is so devastatingly handsome—and fully clothed!

HEART OF THE DESERT by Carol Marinelli

Sheikh Prince Ibrahim refuses to bow to the duty that has destroyed his family, by locking away his emotions and shunning his royal responsibility… Until the desert calls… One searing kiss is all it takes for Georgie to know Ibrahim is trouble…

THE SHEIKH’S DESTINY by Melissa James

DUTY AND THE BEAST by Trish Morey

Rescued from the clutches of a lascivious prince, Princess Aisha Peshwah quickly realises she’s jumped out of the frying pan and headfirst into the fire. Her rescuer is Zoltan Al Farouk bin Shamal—an unashamed barbarian!—who must marry Aisha himself to ensure he is crowned king.

CINDERELLA AND THE SHEIKH by Natasha Oakley

Life has been tough on Pollyanna, constantly at someone’s beck and call. So when she journeys to the desert with magnificent Sheikh Rashid it feels like a dream! Charisma. Power. Danger. In just days, Rashid has taken Polly’s world and changed it.

Sheikh Khalid al Harum was Quishari’s beloved playboy until a fire disfigured his chiselled features. Now Khalid seeks to escape pitying glances, but at his tranquil retreat he meets beautiful, sweet Ella Ponti, who sees the man beneath the scars…