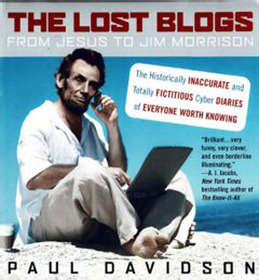 The Lost Blogs: From Jesus to Jim Morrison--The Historically Inaccurate and Totally Fictitious Cyber Diaries of Everyone Worth Knowing

Over 13,000,000 people are currently blogging with thousands being created each day. But what about the blogs you haven't seen, written by the iconic men and women you're dying to know the most intimate details about but who died before the internet was invented? This original take on the biggest literary development since the paperback offers 200 blogs inspired by the most famous minds in history, detailing their hysterical personal revelations, such as: John Lennon's thoughts after meeting Yoko Ono (and her obsession with the Beatles' publishing rights): Marilyn Monroe's annoyance at her new beau 'J', who breaks off their dates with excuses like having to avert a war in Costa Rica: Read Shakespeare on a treatment for a new play about two princes who misplace their horse and carriage and spend the entire play trying to find it or how a stray hot dog nearly derailed Ghandi's hunger strike: There's also the transcript of Neil Armstrong and Buzz Aldrin's intensely competitive game of "Rocks, Paper, Scissors," to decide who would be the first man to set foot on the moon and much, much more. In this book Paul Davidson proves that matters, proving there's no such thing as "too much information."