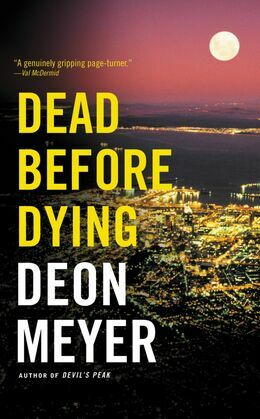 Dead Before Dying: A Novel

Someone in Cape Town has chosen a conspicuous murder weapon -- a century-old German handgun, with ancient bullets that tear through flesh and bone. Three men who have nothing in common are found murdered, and the string of vicious killings pushes the city toward panic. Captain Mat Joubert is left scrambling for answers in a case that might be his last chance to prove that his life's slow spiral will not pull him under. DEAD BEFORE DYING is a heart-racing thriller about a troubled detective determined to find the single thread that weaves together what is otherwise just an assortment of strangers, dead by the same hand. PRAISE FOR DEON MEYER: This guy is really good. Deon Meyer hooked me with this one right from the start. Heart of the Hunter is a thriller with some weight attached, and that is a rare find. -- Michael Connelly, author of Echo Park Nothing is more exciting than a new voice in the thriller arena....Dead at Daybreak is a terrific ride on almost every level. -- Dick Adler, Chicago Tribune