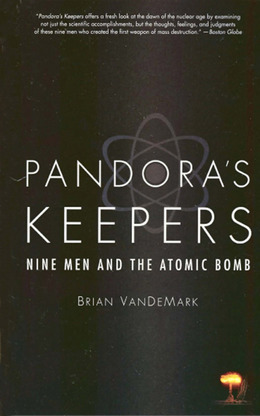 There Were Nine of Them: men with the names Oppenheimer, Teller, Fermi, Bohr, Lawrence, Bethe, Rabi, Szilard, and Compton-brilliant men who believed in science and who saw before anyone else did the awesome workings of an invisible world. They came from many places, some fleeing Nazism in Europe, others quietly slipping out of university teaching jobs, all gathering in secret wartime laboratories to create the world's first atomic bomb. At one such place hidden away in the mountains of northern New Mexico-Los Alamos-they would crack the secret of the nuclear chain reaction and construct a device that incinerated a city and melted its victims so thoroughly that the only thing left was their scorched outlines on the sidewalks. During the war, few of the atomic scientists questioned the wisdom of their desperate endeavor. But afterward, they were forced to deal with the sobering legacy of their creation. Some were haunted by the dead of Hiroshima and Nagasaki and would become anti-nuclear weapons activists; others would go on to build bigger and even deadlier bombs. Some would remain friends; others would become bitter rivals and enemies. In explaining their lives and their struggles, Brian VanDeMark superbly illuminates the ways in which these brilliant and sensitive men came to terms with their horrific creation. The result is spectacular history and a moral investigation of the highest order.