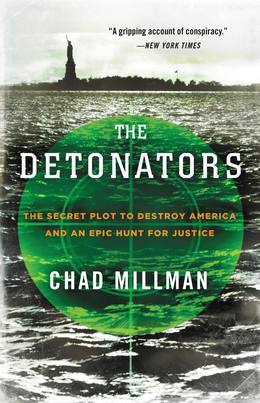 The Detonators: The Secret Plot to Destroy America and an Epic Hunt for Justice

One hundred years ago, in July 1916, an act of terrorism in New York Harbor changed the world.

The attack in New York Harbor was so explosive that people as far away as Maryland felt the ground shake. Windows were blown out uptown at the New York Public Library; the main building at Ellis Island was nearly destroyed; Statue of Liberty was torn into by shrapnel from the explosion, which would have measured 5.5 on the Richter scale. Chaos overtook Manhattan as the midnight sky turned to fire, lit up with exploding ammunition.

The year was 1916. And it had been shockingly easy.

While war raged in Europe, Americans watched from afar, unthreatened by the danger overseas. Yet the United States was riddled with networks of German spies hiding in plain sight. The attack on New York Harbor was only one part of their plans: secret anthrax facilities were located just ten miles from the White House; bombs were planted on ships, hidden in buildings, and mailed to the country's civic and business leaders; and an underground syndicate helped potential terrorists obtain fake IDs, housing, and money. President Woodrow Wilson knew an attack of this magnitude was possible, and yet nothing was done to stop it. Americans, feeling buffered by miles of ocean and burgeoning prosperity, had ignored the mounting threat.

That all changed on a warm summer evening in late July, when the island in New York Harbor called Black Tom exploded, setting alight a vast store of munitions destined for the front.

Three American lawyers--John McCloy, Amos Peaslee, and Harold Martin--made it their mission to solve the Black Tom mystery. Their hunt for justice would take them undercover to Europe, deep into the shadowy world of secret agents and double-crosses, through the halls of Washington and the capitals of Europe. It would challenge their beliefs in right and wrong. And they would discover a sinister plot so vast it could hardly have been imagined--a conspiracy that stretched from downtown Manhattan to the very heart of Berlin.

The Detonators is the first full accounting of a crime and a cover-up that resonate strongly in a post-9/11 America. And much of the atmosphere and rhetoric in play 100 years ago remains eerily similar to discussions surrounding national security and immigration today. As Millman deftly illustrates in THE DETONATORS, an island may have disappeared, but the resulting lessons have only grown stronger and more urgent, and history has a persistent way of stirring up its ghosts. This is their story.