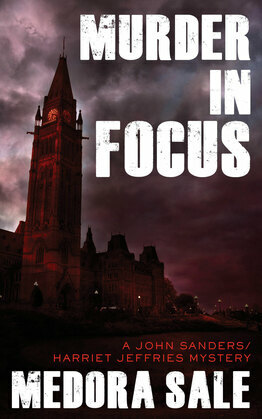 Sent to Ottawa to attend a seminar on anti-terrorism in advance of a trade summit, Toronto Police Inspector John Sanders has nothing more on his mind than getting through the tiresome sessions. But from his first encounter with Harriet Jeffries, an architectural photographer, Sanders finds himself attracted to the headstrong woman.

Intent on completing an important photo shoot, Harriet doesn’t notice until it’s too late that her work contains evidence of a meeting that those in the photograph would do anything—including murder—to conceal. And when Sanders and Harriet’s investigation crosses paths with an active terrorism investigation at the very highest levels of law enforcement, the unlikely pair find they are the only ones who can stop an assassination.

Murder in Focus is the second novel in the John Sanders/Harriet Jeffries mystery series.

“Murder in Focus introduces one of the most appealing pair of sleuths to come along in years. . . . Fine police detail and extraordinarily compelling characters make this an unusual and impressive mystery.”—Mystery News