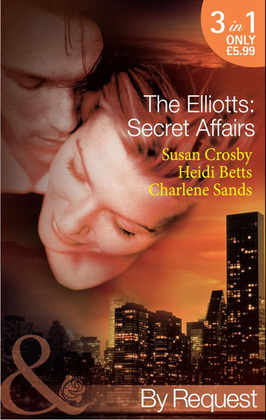 The mysterious “lady in red” who appeared at his Manhattan apartment inflamed his senses and ignited his passion, but John Harlan’s new lover was one woman he could never possess: his ex-fiancée’s twin sister, Scarlet. Scarlet had loved John from afar for years…but could their relationship ever be more than a forbidden affair?

She was his kept woman…a secret lover living in Las Vegas luxury. It had been an ideal situation. Until Misty Vale discovered she was carrying Cullen Elliott’s child. Misty was not the type a millionaire like Cullen could ever take as his wife. Her past was scandalous… But Cullen wasn’t about to allow his heir to be born on the wrong side of the bed!

Publishing heiress Bridget Elliott had lost her memory and was at the mercy of sexy stranger Mac Riggs. All Mac knew about his “Jane Doe” was that she came from money. He had no idea why she had travelled to his Colorado town, but he was determined to uncover the secrets locked behind her beautiful eyes – any way he could.