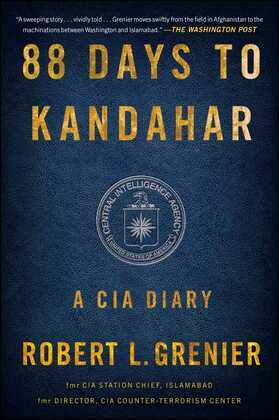 The ?first? Afghan War, a CIA war in response to 9/11, was directed by the CIA Station Chief in Islamabad. It put Hamid Karzai in power in 88 days. ?If you want an insider?s account of the first American-Afghan War, you can?t do better than this?Important reading to understand where we are today? (Library Journal).

From his preparation of the original, post-9/11 war plan, approved by President Bush, through to ?final? fleeting victory, Robert Grenier relates the tale of the ?southern campaign,? which drove al-Qa?ida and the Taliban from Kandahar, its capital, in an astonishing eighty-eight days.

?With his ringside seat as the senior agency official stationed closest to Afghanistan, Grenier is able to describe meeting by meeting, sometimes phone call after phone call, how events unfolded? (The New York Times). In his gripping account, we meet: General Tommy Franks, who bridles at CIA control of ?his? war; General ?Jafar Amin,? a gruff Pakistani intelligence officer who saves Grenier from committing career suicide; Maleeha Lodhi, Pakistan?s brilliant ambassador to the US, who tries to warn her government of the al-Qa?ida threat; and Hamid Karzai, the puzzling anti-Taliban insurgent, a man with elements of greatness, petulance, and moods.

With suspense and insight, Grenier details his very personal struggles and triumphs. 88 Days to Kandahar is ?an action-packed tale, rich in implication, of the post-9/11 race to unseat the Taliban and rout al-Qaida in Afghanistan? (Kirkus Reviews).