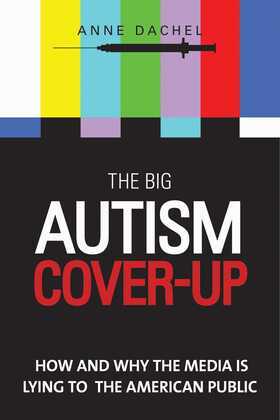 An unflinching look at the truth behind the media?s lies about autism.

Autism now affects 2 percent of US children. A once rare disorder is now so common that everyone knows someone with an affected child. Yet neither mainstream doctors nor government officials can tell the American public what is behind the staggering rise in diagnoses.

The Big Autism Cover-Up explores how news outlets downplay the impact of autism while backing the official denial of any link between the disorder and vaccines. Despite never honestly and thoroughly investigating the link, mainstream news sources continue to challenge those who question the safety of vaccines and the mounting evidence that an unchecked, unsafe vaccination schedule is behind the exponential increase in autism.

Anne Dachel has spent the last ten years monitoring how the press covers autism. She?s seen the media promote the unrelenting message from health officials that autism hasn?t really increased, but rather that it is simply a matter of better diagnosing of a disorder that?s always been around. Meanwhile, autism remains a perpetual mystery, and scientists continue to guess at the genetic and environmental triggers.

Officially there is no known cause or cure for autism. There?s nothing a new mother can do to prevent a baby that was born healthy and is developing normally from regressing into autism by the age of two. Despite this, officials rarely express concern and adamantly refuse to call autism a crisis. The Big Autism Cover-Up exposes this controversy in searing detail.