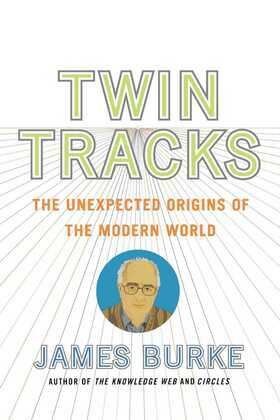 Twin Tracks is a landmark book of real-world stories that investigates the nature of change and divines as never before the unlikely origins of many aspects of contemporary life. In each of the work's twenty-five narratives, we discover how the different outcomes of an important historical event in the past often come together again in the future.

Each chapter starts with an event -- such as the U.S. attack on Tripoli in 1804 -- that generates two divergent series of consequences. After tracking each pathway as it ranges far and wide through time and space, Burke shows how the paths finally and unexpectedly converge in the modern world.

Twin Tracks pinpoints the myriad ways the future is shaped, whether by love, war, accident, genius, or discovery. For instance, in "The Marriage of Figaro to Stealth Fighter," Burke's twin tracks start with the composer of the opera and the French spy from whose play he stole the plot. The tracks then encompass, among other things, freemasonry, the War of Independence, Captain Cook, jellyfish, Jane Austen, and audio tape. Ultimately, the convergence of the two Figaro tracks sets the stage for the development of Gulf War Stealth aircraft.

Wonderfully accessible and lucidly written, Twin Tracks offers an amusing and instructive new view of the past and the future.